BACKGROUND: Dementia affects 15% of Canadians 65 and older, and the prevalence is expected to double over the next two decades. Low socioeconomic status (SES) can increase the risk of Alzheimer’s disease (AD) and the precursor mild cognitive impairment (MCI), but it is unknown what the relationship of SES is on initial clinical presentation to a memory disorders clinic.

METHODS: Data from 127 AD and 135 MCI patients who presented to our Memory Disorders Clinic from 2004 to 2013 were analyzed retrospectively. We examined the relationship between SES (measured using Hollingshead two-factor index) and (1) diagnosis of either AD or MCI; (2) age when first presented to clinic; (3) objective cognitive tests to indicate clinical severity; and (4) the use of cognitive enhancers, medication for treating mild-to-moderate AD patients. 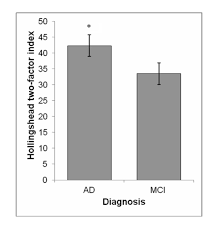 CONCLUSION: Individuals with lower SES come into memory clinic later when the disease has progressed to dementia, while higher SES individuals present earlier when the disease is still in its MCI stage. There were more higher SES individuals who presented to our memory clinic. Higher SES is associated with better cognitive functioning and increased use of cognitive enhancers. The health policy implication is that we need to better engage economically disadvantaged individuals, perhaps at the primary care level.