We report the 5- and 10-year survival rate of women diagnosed with breast cancer in the context of an annual MRI-based surveillance program. In 2001, as part of a national initiative, women in Norway with a BRCA1 mutation were offered annual screening with breast MRI in addition to mammography. 802 women with a BRCA1 mutation were screened one or more times and followed for a mean of 4.2 years. As of December 2011, 68 of 802 women in the screening program were diagnosed with DCIS or invasive breast cancer (8.5 %), including eight prevalent, 50 incident screen-detected and eight interval cancers. Two latent cancers were detected at prophylactic mastectomy. Sixty-three of the cancers were invasive and five were in situ. 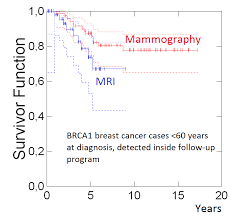